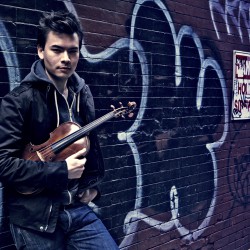 Stefan Jackiw is one of America’s foremost violinists, captivating audiences on both sides of the Atlantic with his poetry, pure sound, and impeccable technique. Hailed for playing of “uncommon musical substance” that is “striking for its intelligence and sensitivity” (Boston Globe) Jackiw has won the support of numerous conductors including Andris Nelsons, Yannick Nézet-Séguin, Sir Andrew Davis, Juraj Valčuha, Yuri Temirkanov, Hannu Lintu, Ludovic Morlot, Philippe Herreweghe and Hans Graf.

In summer 2022 Jackiw returned to Carnegie Hall to perform Bach with the Orchestra of St Luke’s. Elsewhere last season he performed with the NDR Elbphilharmonie/Alan Gilbert, Orchestre National de Lyon/Szeps-Znaider and returned to the Cleveland Orchestra/ Rafael Payare, the Boston Symphony/Alan Gilbert and premiered a new violin concerto written for him by Conrad Tao with the Atlanta and Baltimore Symphony Orchestras. Further afield he has recently toured with the Australian Chamber Orchestra, performed with the Tokyo and Singapore Symphony Orchestras and is a well-known soloist in Korea.

In recital Stefan Jackiw has performed at the Schleswig-Holstein Music Festival with pianist Christoph Eschenbach and at the Louvre in Paris and regularly gives recitals throughout North America including at the opening night of Carnegie’s Zankel Hall. As a chamber musician he has collaborated with Yo-Yo Ma, Gil Shaham, Steven Isserlis, Mahan Esfahani and regularly works with Jeremy Denk. He is a member of the Junction Trio with pianist Conrad Tao and cellist Jay Campbell.

On disc, Jackiw received critical acclaim for his debut recording of Brahms Violin Sonatas with pianist Max Levinson released on Sony: “Jackiw is fantastic…This is now the recording of Brahms’s violin sonatas to have” (Fanfare). He has recorded the Beethoven Triple Concerto with the Academy of St Martin in the Fields with Alan Gilberg, Alisa Weilerstein and Inon Barnatan for Decca Gold and the Ives Violin Sonatas with Jeremy Denk for Nonesuch.

Born of Korean/German heritage, Jackiw began studying the violin at the age of 4. His teachers included Zinaida Gilels, Michèle Auclair and Donald Weilerstein and in 2002 he was awarded the prestigious Avery Fisher Career Grant. He plays a violin made by Vincenzo Ruggieri in Cremona in 1704 and lives in New York City.