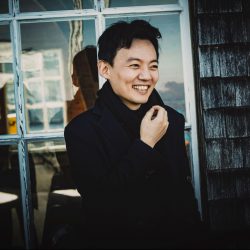 Seoul, Boston, Hanover, Como, Munich: Born in 1982, William Youn first discovered the piano in a kindergarten in Korea and after early studies in his home country and in a boarding school in the USA, William again changed continents to study at the Hanover University of Music and at the Piano Academy Lake Como, where he worked regularly with Karl-Heinz Kämmerling, Dmitri Bashkirov, Andreas Staier, William Grant Naboré and Menahem Pressler.

William Youn’s extensive discography includes recordings on Sony Classical, Oehms Classics and ECM. Most recently, after several recordings with violist Nils Mönkemeyer and his solo album “Schumann-Liszt-Schubert”, William has started a new project for Sony Classical in 2020 to record all the Schubert piano sonatas. In a review, Fono Forum stated: “ Youn’s playing impresses with its flawless, perfectly realized naturalness. ”
His Mozart sonata cycle, previously released by Oehms Classics was highly praised in the press and awarded numerous prizes.