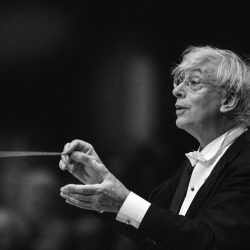 Several of his CDs have won international prizes such as the Grand Prix du Disque, the Diapason d’or and the Edison Award. His recordings of the operas “Venus” and “Penthesilea” and of all choral works by Othmar Schoeck with the MDR choir and symphony orchestra received great international recognition and prestigious awards, as did his first film, “My Brother the Conductor” by Alberto Venzago, which was shown in cinemas across Europe and brought out on DVD. The project “The other Bruckner” with the recording of all ten symphonies, whose individual releases were acclaimed by international critics, was released at CPO. A collaboration with Sony Classical led to the spectacular recording of Franz Schubert’s „Unfinished“ symphony with the Kammerorchester Basel, completed and conducted by Mario Venzago, and the recording of all serenades and symphonies by Johannes Brahms. The most recent CD projects have been recordings of Othmar Schoeck’s opera „Schloss Dürande“ in a new version with the Berner Symphonieorchester and the cantata „Vom Fischer und syner Fru“ with the Musikkollegium Winterthur (both Claves).