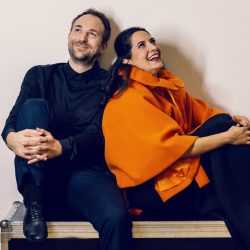 The story of our piano duo began in a rather unusual way. As opposed to the great number of existing duos of siblings or of couples who got to know one another during their studies, we started to form a husband-and-wife team when we already had individual careers as solo artists to look back on, and it was only after we started living together that we discovered the marvels of playing four-hand piano together. Approaching it like a game, without instruction from outside, we were astounded to discover that there is an immense, rich repertoire for two pianists. Our baptism of fire took place at our first public concert at the Antalya Festival in 2014, with Stravinsky’s Le Sacre du printemps and our own selection of waltzes by Brahms and Hindemith.
Further appearances soon followed, along with our first CD recording: our intention was to approach our two origins within a musical framework. Go East! is thus a concept album where we combined the melodies and rhythms of an “East” that was conceived as broadly as possible. Recitals at the Bad Kissingen Summer Festival, at the Berlin Konzerthaus, at BOZAR in Brussels, and at the Lockenhaus Chamber Music Festival were some of the first highlights of our performing career as a duo, and we had the pleasure of collaborating with such orchestras as the WDR Symphony Orchestra (Cologne), the Folkwang Chamber Orchestra (Essen), and the Wiesbaden State Orchestra. Sharing the stage with the WDR Radio Choir is also a thoroughly enriching experience. Or second CD, Dialogues, once again focused on the subject of origins, and on finding a living connection with our musical past. Having lived by then for over ten years in Cologne, we placed an iconic work by a well-known 20th-century composer from that city in the center of our programme: Bernd Alois Zimmermann’s Monologe. All the while, we continued to progress on our journey towards the east.
Combining thoroughly different works on our recordings is not the only goal for a German-Turkish couple such as ours, with Iranian, Arabian, and Romanian roots: it also opens the door for what we conceive as fulfilled music-making together.
On our third album „In Search Of“, we tell the musical stories from our childhood. Despite our different backgrounds, we explore music‘s potential to build bridges, which has guided us ever since we were children.
With our YouTube series “off the record” and “literally music”, we have created a platform for conversation and music that allows an intuitive and fresh access to classical music. At the same time, they give a personal look behind the scenes of a musician family. When we are not giving concerts, we spend our free time with our daughter Kayra in Cologne, in the foothills of the Alps in Upper Bavaria, and in Istanbul.