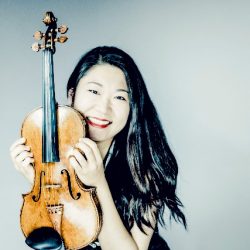 With great sovereignty, uncompromising musical understanding and ravishing interpretations, Tianwa Yang has quickly earned a place among the ranks of the leading violinists. The works of Wolfgang Rihm and Jörg Widmann and her work with contemporary composers are as close to her heart as the “classics” of Beethoven, Brahms, Bruch, Prokofiev, Sibelius and Tchaikovsky. Her profound preoccupation with music and her authentic playing, which is both at ease and electrifying, have been honoured with numerous prizes.

In 2022 she will receive the OPUS Klassik as “Instrumentalist of the Year”.

In the season 2022/23 she will be Artist in Residence with the Brandenburg Staatsorchester Frankfurt as a soloist and with chamber music in Frankfurt (Oder), in Potsdam’s Nikolaisaal, in Poznan, Poland, and at the Choriner Musiksommer.

With her chamber music and recital programmes, she performs at major venues such as the Berlin Philharmonie, the Cologne Philharmonie, the Festspielhaus Baden-Baden, the Wigmore Hall London and the Lincoln Center New York, as well as at renowned festivals such as the Lucerne Festival, the Rheingau Music Festival, the Heidelberger Frühling, the Mozartfest and the Festspiele Mecklenburg-Vorpommern. She is also a regular guest at the Wittener Tage für Neue Kammermusik, where she has premiered contemporary chamber music works by Benjamin Scheuer or Luca Francesconi, among others.

In the course of her long-standing collaboration with the Naxos label, she has already produced several award-winning recordings, including the complete works for violin and orchestra by Wolfgang Rihm, the violin concerto and the double concerto by Johannes Brahms with the Deutsches Symphonie-Orchester, the six solo sonatas by Eugène Ysaÿe, the complete recording of the violin works by Pablo Sarasate, the complete works for violin and piano by Wolfgang Rihm, a CD with both of Mendelssohn Bartholdy’s violin concertos and Lalo’s “Symphonie espagnole” with the Barcelona Symphony Orchestra under Darrell Ang. Most recently, she released her album in September 2021, featuring Prokofiev’s two violin concertos with the ORF Radio Symphony Orchestra under Jun Märkl. A CD with works by George Antheil will be released in the season 2022/23.

Tianwa Yang thanks Lin Yaoji, Jörg-Wolfgang Jahn and Anner Bylsma, who have accompanied and significantly shaped her artistic development.

In addition to her concert activities, Tianwa Yang teaches at the Bern University of the Arts since 2015 and holds a professorship at the Würzburg University of Music since 2018.