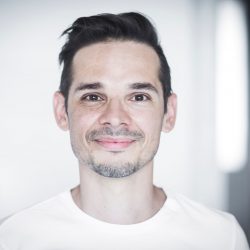 Miroslav Srnka’s international breakthrough came in 2016 when his opera South Pole was premiered at the Bayerische Staatsoper in Munich under Kirill Petrenko, in a production by Hans Neuenfels that featured Rolando Villazón and Thomas Hampson in the title roles.

In the 2021/22 season the Lucerne Festival will present the first performance of all parts of the orchestra pieces move 01-04 for orchestra with the Bamberger Symphoniker under Jakub Hrůša. In the frame of the WDR concert series “Musik der Zeit” the WDR Sinfonieorchester conducted by Titus Engel will premier Srnka’s new Concerto for two Horns and Orchestra. Last but not least, the Theater Aachen will present the chamber version of his opera Jakub Flügelbunt.

His short opera Wall, based on a work by Jonathan Safran Foer, was premiered at the Staatsoper Unter den Linden in Berlin in 2005, and in 2006/2007 he was the “Composer for Heidelberg” at Theater Heidelberg. In 2011, his chamber opera Make No Noise premiered at the Bayerische Staatsoper and Jakub Flügelbunt, a “comic book for three singers and orchestra”, received its first performance at the Semperoper in Dresden. In 2017, the Dialogues Festival in Salzburg presented a comprehensive portrait of the composer with numerous events and premieres. For its 100th season in 2018/2019, the Los Angeles Philharmonic commissioned Srnka to write the piece Overheating. In 2015, the concert series musica viva in Munich presented move 01 & 02. During the same series in 2019, Speed of Truth was given its first performance with Jörg Widmann, clarinet, and the Bavarian Radio Symphony Orchestra and Bavarian Radio Chorus conducted by Susanna Mälkki. The commissioned work Milky Way, written for the ECHO (European Concert Hall Organisation) Rising Stars Tour and the trumpeter Simon Höfele, had been premiered at the Concertgebouw in Amsterdam, with further performances in the Elbphilharmonie in Hamburg, the Cologne Philharmonie, the Philharmonie Luxembourg, the MüPa Budapest, The Sage Gateshead, St Lukes in London, the Gulbenkian in Lisbon, Baden-Baden and Birmingham. In 2021 the Bayerische Staatsoper Munich, together with the Klangforum Wien under Patrick Hahn, premiered his new chamber opera Singularity – A Space Opera for Young Voices.
Srnka has collaborated for many years with the ensemble Quatuor Diotima, which has performed his quartets across Europe and issued a portrait CD with chamber music on the Naïve label.
Srnka, born in Prague in 1975, studied musicology at the Charles University and composition at the Prague Academy of Performing Arts. In 2019, he was appointed professor for composition at the Hochschule für Musik und Tanz in Cologne.