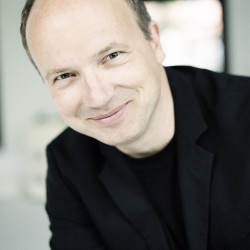 Roland Kluttig has been the principal conductor of the Graz Philharmonic Orchestra and Graz Opera since the 2020/2021 season. After he had already conducted successful new productions of Paul Dukas’ “Ariane et Barbe-Bleue” and Karol Szymanowski’s “Król Roger” in this opera house in previous years, the 20/21 season began with a production of Mieczysław Weinberg’s opera “The Passenger”, which will be issued in the coming autumn on CD and DVD as well. He opened the 2021/22 season at Graz Opera with a concert that combined Richard Strauss’s “Alpine Symphony” with Georg Friedrich Haas’s concerto grosso No. 1 for 4 alphorns. Kluttig’s new productions at Graz Opera will be Haas’s opera “Morgen und Abend” (“Morning and Evening”) in its Austrian premiere and Wagner’s “Flying Dutchman”, alongside concerts with the Graz Philharmonic in the Stefaniensaal in Graz and the Vienna Konzerthaus.

After Kluttig’s début at the 2021 Salzburg Festival conducting a performance of Morton Feldman’s “Neither” with the Vienna Radio Symphony Orchestra (RSO Wien), Jan Brachmann wrote in the German daily Frankfurter Allgemeine Zeitung: “Roland Kluttig, one of the few conductors in the world who can perform the newest music just as adeptly as Beethoven, Wagner or Sibelius” (article from 17 August 2021).

From 2010 to 2020, Kluttig was the general music director at the Landestheater Coburg, where his conducting of “Lohengrin” and “Parsifal” in particular drew great media attention. He also captivated audiences with new concert formats and was nominated as Conductor of the Year for his version of Beethoven’s “Fidelio” in the annual survey carried out by the specialist journal “Opernwelt”.
Roland Kluttig also conducted the new productions of “Salome”, directed by Kirill Serebrennikov, and “The Marriage of Figaro” at Staatsoper Stuttgart – the opera house in which he worked as kapellmeister and assistant conductor from 2000 to 2004 and where he has regularly made guest appearances since 2012. He also conducted at Hamburg Staatsoper (“Die tote Stadt”) and was in charge of new productions in opera houses including Oper Frankfurt (“Euryanthe”), the Opéra national du Rhin in Strasbourg (a Kurt Weill evening), Oper Leipzig (“The Love for Three Oranges”) and the Swedish Norrlandsoperan (“Peter Grimes” and “Wozzeck”).

His discography includes recordings of Schoenberg’s “Moses und Aron” with the Staatsoper Stuttgart and works by less frequently played composers who are close to his heart, such as Erwin Schulhoff with the Deutsches Sinfonieorchester Berlin and Silvester Revueltas with the KNM Berlin, of which he was the musical director in the 1990s. Kluttig studied in Dresden, took part in masterclasses by conductors such as Peter Eötvös and John Eliot Gardiner and has received support from the Dirigentenforum (Conductors’ Forum) of the German Music Council, Akademie Schloss Solitude and the Herbert Karajan Foundation.